Mac OS X Mavericks wasn't a great experience for me. Understandably perhaps, my April 2008 iMac seemed to struggle with the OS. The update to Mac OS X Yosemite doesn't really improve upon the experience, but now the spinning beachball or interface delays seem to be the norm for me.

OK, a 6-year-old iMac with no additional memory added is (possibly) likely to struggle...and I had been contemplating getting a new iMac (which I will be doing with the Retina iMac announced), but I never expected to be sitting at my iMac waiting for what I consider to be basic interface changes to happen.

Fetching....my new arch nemesis! Sometimes it can take up to 30 seconds for this pop-up menu to populate. Sometimes it never does or it is quicker to try again...but I would have assumed that the Mac would gradually build up these options and store them, but it doesn't seem to. Instead, this menu is re-populated anew every time by the looks of things!?

Here now is a non-exhaustive look at some of the quirks I have noticed with the most recent version of OS X released. Some of these are interface issues, some are interaction issues and others are just frustrating quirks I can't wait to see resolved.

Apple has gone transparency (sometimes I hear it referred to as translucency) crazy. Take a look at the next series of images. In this first image, I have clicked the file "safari-private.jpg" and then have right-clicked directly above it....

Look at how the blue from the selected file behind the pop-up menu bleeds into the pop-up window. It's very clever...and totally unnecessary.

Now take a look at this image. I've still clicked on the same file, but this time right-clicked over a different file. So where's the blue this time?

Well the blue is still there, but this time it's more subtle. This is because the cursor isn't directly over the blue selected file...so less of the blue is bleeding into the pop-up window.

Again, really clever. It must have taken a lot to work this out...but again, totally unnecessary. We now have two different shades being presented for the same pop-up window.

In the image above, I'm right-clicking above a file that is nowhere near the original file that was selected (in blue) so no blue is bleeding through.

This now means we have been presented with multiple shaded versions of the pop-up window, even just in this simple activity. It's clever, it's consistent (and yet oddly inconsistent) and it just isn't needed.

So I suggest you do what it appears a lot of people are doing...going into Accessibility and reducing transparency. 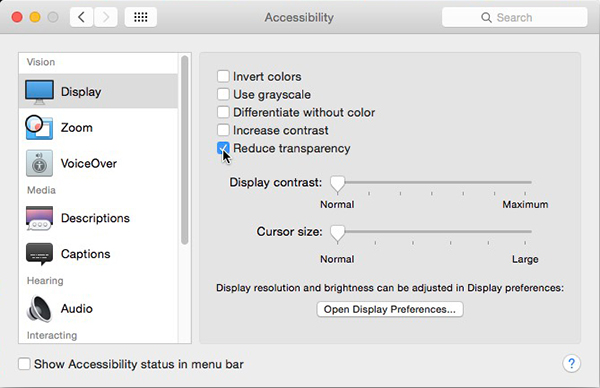 I'm partially colour-blind...it tends to be shades that I have the most issue with. I can look at a dark green and think it's brown for example. It may be this, or it may just be old eyes...but the shading in Yosemite is so subtle at times it's almost non-existent.

Take a look at the Trash can full...

It's easy to see it's full and you can see the three-dimensional look applied to it. But now look at the Trash can empty...

Looking at this image, it actually appear better than it does when working with it on a day-to-day basis...particularly when you consider the brightness of the room and the monitor you are working on. Sometimes this Trash can has no depth to it at all. It just looks like a white blob sitting on my desktop (thanks to the third-party launcher I use) or in the dock.

There's an excellent commentary on the poor visual contrast (and other issues) - Subtraction.com - Thoughts on Yosemite’s Look and Feel

You can see the limited 3D effect also in the Finder icon...

I find this version of the Finder icon a step back from previous versions. The flatter look just doesn't seem to work for me.

Speaking of which, take a look at this...

So what is it?

Well, it's an image showing two things. In the background is the Apple website being displayed in Safari...and in front is another application. Can you make out (as you move up the image) where the top of the front application ends and the web browser comes in? Difficult isn't it?

The flat look and the lack of shading can be so subtle that it's difficult to distinguish differences in open windows even right there in front of you.!

Then there's the traffic lights.

Take a look at the image below and note how the 3 traffic lights are on the same row as the other controls for this Apple application...

So it's the same with all Apple apps right? Well, no...just look at the Apple app below and the traffic lights now sit about the other controls...

I would never have expected this amount of inconsistency in the interface from Apple with their standard apps. Yosemite really does feel like it was/is a work in progress that needs fixing.

Despite being updated, it appears that the Yosemite installer forgot to update the name of the Recovery disk, which should now be called "Recovery-10.10"..

Using the Volume up and Down keys on the keyboard means a graphic of the volume pops-up on screen, but as you can see in the image that follows, this graphic has no transparency on the corners when in fact it should... 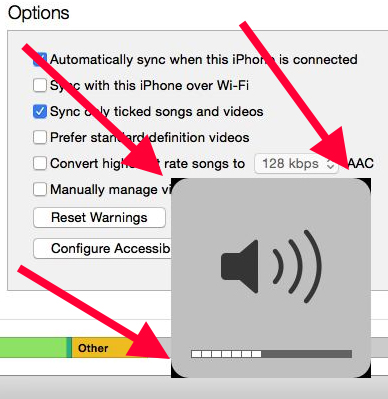 I'm not sure if the image above is a fault of Yosemite or of my iMac struggling to redraw the screen when the Finder requires it.

On to iTunes...I find this one very odd. Take a good look at the image below from iTunes. Everything I am pointing to in red is selectable or can be clicked on...everything! Except the one thing you think you should also be able to select...the Phone.

Instead, the only way to learn more about the device is to click on the 'reveal' triangle to get more options to select. This is quite a change from how the interface worked in iTunes previously. It seems odd to have something that can't be selected right in the middle of a group of similar looking objects that can be selected. 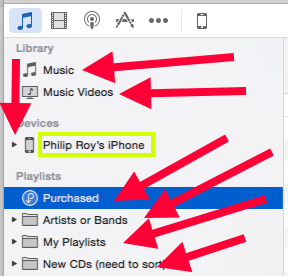 I stopped liking iTunes a few versions back now. I think Apple have a big problem with it as an application, and so far their fixes seem to have done little to make it usable.

OK, now I know I should let this go, but I'm finally having to say goodbye to a trustworthy and valuable friend with Yosemite...

iMovie HD has finally stopped working...and I'm shattered. It's easy-to-use interface has been a godsend, and I am really going to miss it.

Of course, clever people have tried to come up with a workaround, but it doesn't really solve the issue. Goodbye good friend ;-(

The new version of Safari introduces some very odd interface changes. The first is how it displays a website address..

By default (as above) the web address is shortened to display just the main address, even though in this image I'm a few pages into the Stuff website. I think this it is poor having this as the default setting for two reasons...

But don't worry, there's an easy fix in the Safari settings...

Turn this on and web addresses go back to being displayed in full, as you can see in the image below...

Private Browsing is not only clumsy to enable in this new version of Safari, but when you do, the first window that is produced has an annoying dialogue that you need to dismiss. Previously just hitting Return on the keyboard made the dialogue alert disappear.

And finally with Safari, there's tabs. Take a look at how Safari has clumped a series of tabs together in the image below...

One word...yuck. I think the way in which a large number of tabbed windows is displayed is messy and nonsensical. I have no idea how to interpret the "..."seen on one tab and why other tabs vary in width. It really is messy.

I'm not a great Dashboard user, as you can see by the limited number of Dashboard widgets I use. 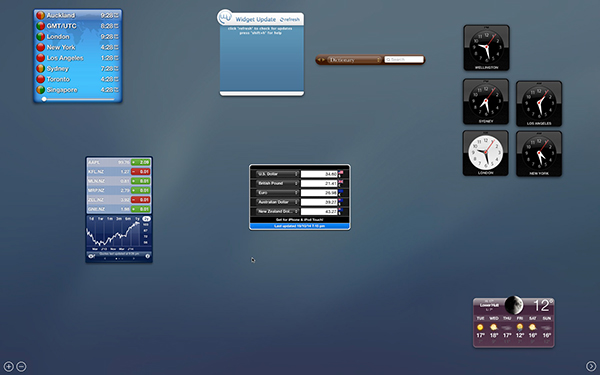 ...but I never liked how Mavericks put these widgets in a window away from the rest of your work. I found it totally confusing.

The good news is that you can go back to the old way of having the Dashboard displayed as an overlay... 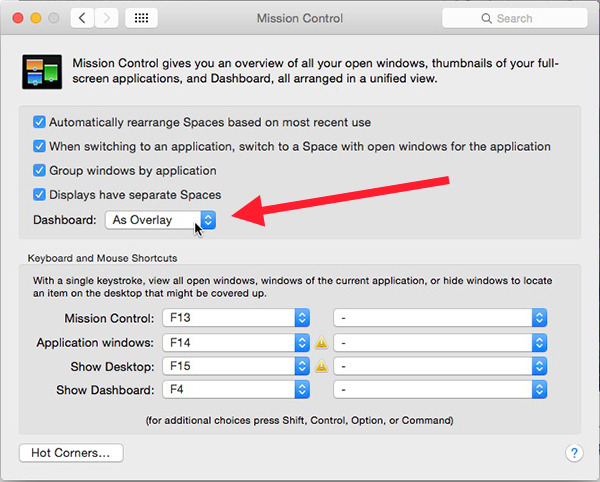 And there you go.. 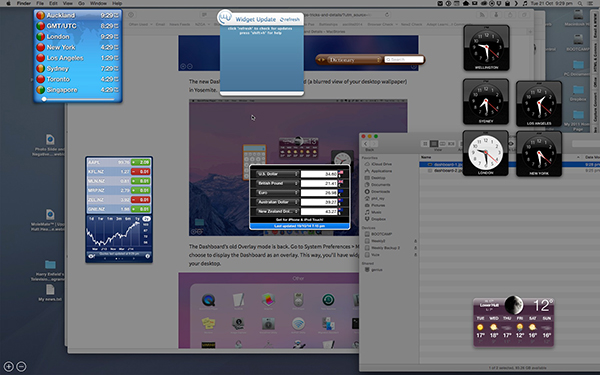 Note - I found this news re the Dashboard in a superb story from MacStories - OS X Yosemite: Tips, Tricks, and Details

Here's another one I simply don't get. On the top-right of an email message, Apple Mail now displays the initials of who the message is from. Just in case you're confused, I said who it is from, not where...so this one isn't from the Netherlands, it's from Noel Leeming.

I don't even consider this good design. I consider it frivolous.

OK, if the email is from someone in my address book that I have added an image to their contact details, the initials are replaced with this graphic...but why display the initials for others? I've clicked on the email. I've seen who it is from. These initials aren't helpful.

I forgot to mention that I've had three crashes whilst running Yosemite. Strangely it can be for as something as simple as emailing a big file. I got very used to them in Mavericks (mostly when downloading things in iTunes) and I think of them as the "silent killer". What I mean by that is if my iMac suddenly goes really really quiet, I know it's about to crash. Any attempt to shut down applications or access a menu results in the spinning beachball.

Then, it's all silent...and then blackness and the reboot noise. 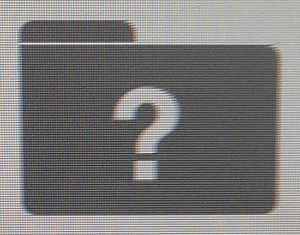 What is frustrating with Yosemite though is that on reboot I am faced with the blinking folder that you see above. The first time this happened it scared the heck out of me! Why? Well it means that the Mac is having trouble finding a hard drive or partition from which it can boot up from. In days gone by this crash could also signal that no true start-up disk had been selected, but I've not seen an issue like that in a long time.

So when my first thought was "Oh my god, my hard drive is toast", what I had to do was force a shutdown (by holding the power key in on the back of the iMac), start the iMac up again, hold the option key down and then select the original HD as the startup disk. I'm not impressed that it seems to be defaulting to the blinking icon instead of being able to find a genuine startup volume during each crash.

Here's another odd quirk. Sometimes the screen takes so long to redraw, that artefacts are left on screen. Here I had a window open that showed the disk I use for Time Capsule in the process of being backed up. The little arrows showing the backing up occurring were spinning. But then I minimised the window and the arrows remained on screen. In fact, there were 3 of them, and they kept on spinning right there on the spot. Really odd! 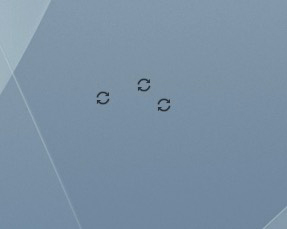