Please note this is not a review and is not intended as a guide in any way shape or form...it's just some random notes on things I discovered whilst getting ready to install Mountain Lion and on starting to use it.

1. You should look at this page on How to Make a Bootable OS X 10.8 Mountain Lion USB Install Drive or look at this application (Disk Maker) before you install Mountain Lion. I prefer to have a DVD of each OS to keep and so first tried Lion Disk Maker but it failed to function (note, it was a release candidate version of the app and appears to have had one update since I tried) so I ended up taking the more hands-on approach to burn a DVD. You'll need a dual layer (8Gb) DVD and be warned that the DVD is very slow to boot up once you create it...so you might want to consider the USB stick approach instead.

2. Screen Casts Online has created a superb free to view tutorial about Installing OS X Mountain Lion that I urge you to watch before hand

3. As always, Ars Technica has an incredibly detailed review of Mountain Lion. Interestingly, the author has also posted details on other ways you can view the review and support him and the site. The ePub version is a massive 117 pages long and worth every cent!

5. If you really want to keep up-to-date with all your software, I recommend the superb AppFresh for checking if there are updates available to software. It seems to catch more updates than CNET's TechTracker, although both sometimes show inaccurate updates. AppFresh has just turned commercial it would seem and is for sale at $9.99 USD at the moment....I think that's a bit much, but the exchange rate makes it great at the moment.

1. Choosing "Software Updates" from the Apple Menu now opens the Mac App Store application and goes straight to the updates view/tab. It then begins checking for both App Store downloads and other Apple software updates you might be entitled to. The easiest way to describe this is to say that the two methods of looking for Apple software updates (via the App store and the original method) are now unified.

It may take a while to process at first, but you are then presented with a unified "Update All" option for all Apple software. Great stuff!

2. Safari seems faster than I have ever experienced. I've never really noted an improvement like this before. I hated the unified search and address entry area at first, but now love it.

3. The awful auto-lock feature that used to lock all documents after a certain time in Lion is now gone. Instead, you are able to lock individual documents when you have them open from a small drop-down menu next to the document title... 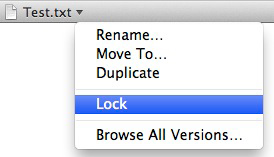 4. I'm really impressed with the install process, letting me know about incompatible apps. The only one that came up as incompatible was Snapz Pro, which Ambrosia Software have acknowledged and are working to fix.

The one other issue I faced was a warning from Xmarks for Safari. So I downloaded the most recent version and got the new security warning... 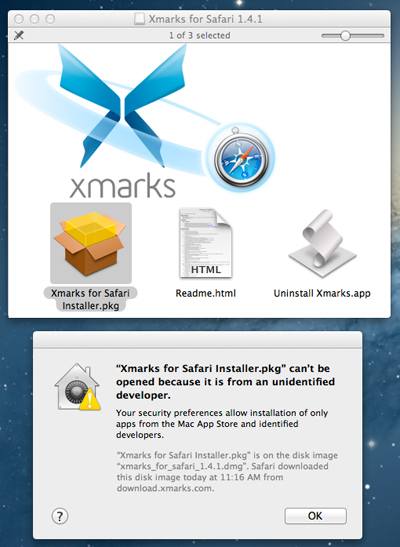 So this meant going into the System Preferences and changing my settings to allow downloads from Anywhere to be opened... 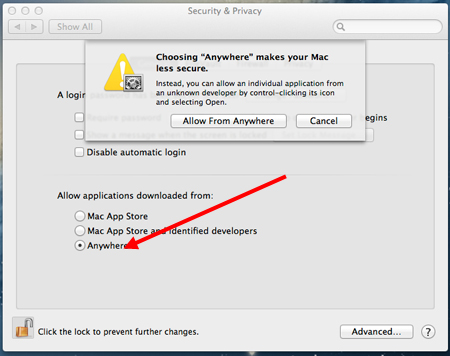 Apple warn you that this makes your Mac less secure, but otherwise I think I'd find that warning coming up quite a bit at this stage since there are a lot of updates for applications coming out.

5. The "Empty Caches" option for Safari has been tucked into the developer menu so would be hidden to most people by default... 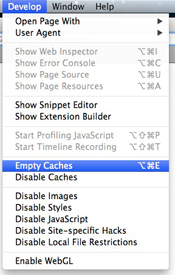 6. Safari tabs - I don't like how they now stretch across the whole width of Safari and can find no hack to change this. Take a look at the following image... 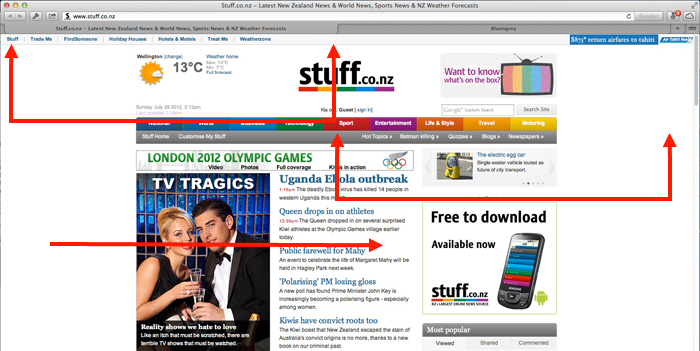 In the image above, I have two tabs open. To make the second tab come to the front I have to move my mouse half way across safari's window and click. This might seem trivial, but on a large screen this means moving the mouse far more than I used to. At the same time this distance is never the same but dependent on how many tabs you have open. For example, if you have 3 tabs open the distance is more than if you have 4 tabs open etc.

I'm also very disappointed that my favourite Safari trick no longer seems to work. Previously if you double-clicked in the tabs area, it would create a new blank tab page for you. That appears to have been removed.

1. To get the full impact of the new OS and its sharing capabilities, you should go to System Preferences and check the "Mail, Contacts and Calendars" settings and add in new services at an OS level (such as your Twitter contact details) so that you can post to Twitter straight from Safari for example. 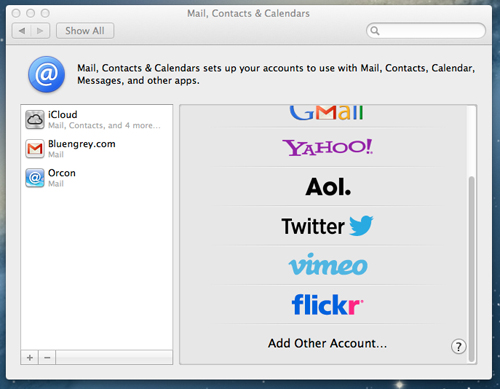 2. In the General settings there are a couple of nice options. The first is to always be prompted if you want to save when closing a document that you have changed, and the second is to close windows when quitting an application. The latter is great to stop the odd Lion quirk of documents always reappearing when you re-launched an application.

1. I've come across a strange quirk with the Skitch screen capture tool in that after use, the app doesn't appear in my "Recent Items" list to access it again. I keep having to launch the app a different way.

2. I have an issue with Messages always saying I am offline. I tracked down the issue at MacRumors.com and discovered it relates to a long standing issue I have where my AppleID remains as "@mac.com" and cannot be edited. Apple have tried to fix this in the past and it has caused issues. I phoned them and used an online form (at their request) to send in details. I've heard back from them but at the moment their 'fix' didn't work and the situation has worsened, with my email address defaulting on the Apple servers to the now nonexistent "mac.com" email address.

3. I couldn't live without the DragThing application launcher that I use instead of the OS X dock. However it's placement causes issues with Notifications. Look at the image below and you can see it is going to be hard to remove alerts from Notifications because DragThing is in the way. Personally I would like to be able to move Notifications completely to the left of the screen. Maybe this will come in OS X 10.9? Instead, the fix is to get DragThing to move when you open Notifications.

4. I'm having an issue with my Mac and Mail after waking the Mac up. The email accounts are often offline or showing a error. Immediately checking for mail doesn't resolve the issue or bring the accounts back online...in fact it says there is no new mail (and the exclamation mark next to the mailbox remains) even when I know there is mail to be received. I am finding I am having to quit Mail, relaunch it and then check for mail to get it working again.

5. The installation process obliviously didn't find every incompatible application. I realised the superb SoundSource from Rogue Amoeba wasn't running. On trying to launch it the following message came up...

RogueAmoeba have confirmed this is an issue via Twitter but have also stated they haven't committed to updating the application at this stage.

In the meantime, I never realised this handy tip for changing the devices you are using for sound input and output - http://macs.about.com/od/usingyourmac/qt/audio-in-out-menubar.htm

6. A new issue has arisen with mail that is the opposite of the previous issue on wake up. This time the Mac is waking and Mail is immediately checking for mail, even though I have the application set to only do this manually (i.e., it should only check for mail when I tell it to).

7. Shutdown times are very long. I've never experienced this before and it was quite common for me to shutdown at night and wait for the iMac to switch off before I left the room. Now I'd be standing there for some time to see the iMac truly power down.

8. I'm also having some odd issues with keyboard shortcuts. I have an extended keyboard and use F13,14 and 15 for window management, such as showing the desktop, displaying all open windows of an application etc. I'm noticing that now and then the functions keys stop working. Looking under System Preferences it says there is a conflict, but I can find no other applications set to use these Function keys. Restarting the Mac brings these keys back to life and working. Obviously there is an issue there.

9. One last quirk on trying to publish this article is that Safari seems to have an issue with my Joomla website. When I load a page to edit, scrolling fails to work in Safari any more. I changed to Firefox to finish publishing this.