iOS 7 is a radical overhaul of the performance, look and feel, and way that you interact with your iOS device. It moves away significantly from previous versions of the iOS, bringing with it differing ways to interact with your iOS device. The UI/UX changes are severe in many cases. Apple has moved away from the approach of small incremental changes to iOS with each update, with a significant change that is not to everyone's liking.

I confess I haven't really got used to iOS 7 yet, but I'm sure that I will. I'm not saying whether I like it or not in this article...but instead, focus on some iOS peeves that have me frustrated or just simply surprised by what I consider (in some instances) bugs. Here goes...

1. Not everything that is On, is On

Take a look at the image below. Is the Cellular for my iPhone on or not?

You can certainly tell that Bluetooth is On and that a Personal Hotspot is off, but what about Cellular?

You could argue that tapping Bluetooth or Personal Hotspot leads you to one button and one button only (on or off) so it makes sense to show them at this level also...and that Cellular leads you to a host of options. However, those options are only relevant if the first button in the Cellular section is On. 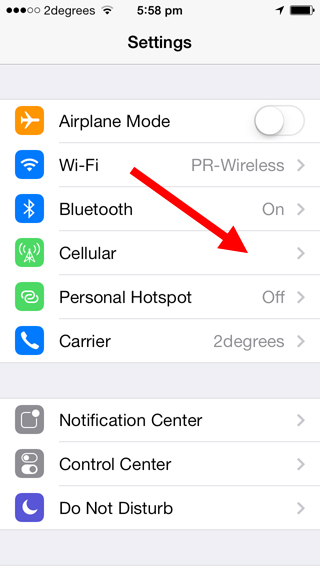 So, Apple may be thinking "It's not listed here because you have to go down a level to adjust a number of settings". OK, but let's now look at the second glitch...

Maybe displaying "On" for Cellular isn't seen as important, but how come displaying "Off" is? As you can see, iOS tells you when "Cellular" is "Off", but not when it is "On". 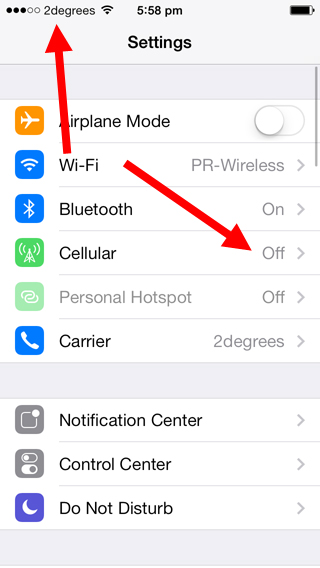 But what does "Cellular" mean? If you turn "Cellular" to "Off", does your phone still work? The answer is in fact yes and you can see it in the image above, where my phone company (2Degrees) is clearly still showing up.

Turning "Cellular" to "Off" is in fact the process to turn cellular data to off...so why isn't it labelled as "Cellular Data" to make that more clear?

In writing this article, one frustration I have is that the images that I am using show things far more clearly then when using the phone, depending on the lighting you are looking at the phone under and the brightness settings you have the phone set to. In the image from using the alarm in the Clock app, there are two scroll wheels you use to select the hour and minute. I think it's near impossible to understand these are scroll wheels unless (a) you are in substantially good lighting, (b) look very closely, (c) have used the alarm before or (d) just have a play and discover the functionality. 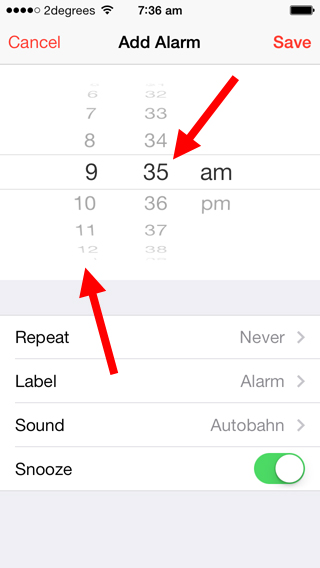 Here's another example of a scroll wheel. I think if they are going to move to a 'flat" design (as everyone has calls the look of iOS 7) the scroll wheel should be got rid of, and the numbers should simply be a list that you flick up and down through. Get rid of any styling that suggests the notion of a wheel you are spinning. It feels clumsy now and not suited to iOS 7. 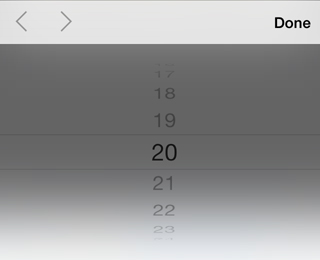 I thought at first that it was just a case of an email not having downloaded completely, but I am finding the unread mail count often forgets I am reading my last email. In the image below, I am reading the one and only email I have received...but it is telling me visually that there is one more email in my in box. There isn't.

Again, in this image from the phone, it's easier to see than when using the actual phone itself...but I find it increasingly difficult to know when I have "Repeat" and "Shuffle All" activated. In the image you can see that "Shuffle All" is activated, but when walking around using the phone, I find I have to stop and have a good look before I can figure it out.

6. Buttons that you can't even see

Again (yes it's going to be said a lot) but watching a video in a dark room or with the brightness of the phone turned down, it's staggeringly difficult to realise that there are buttons in the dark area of the screen that can actually be tapped. So here in this image, "Done", full screen, play controls and the AirPlay buttons can all be tapped...only when I was watching the video, I could hardly see they were even there to use.

And with the image above, what is the style guide for a button? Does it have to be dark and in the background? No, because not all of them are. Should it be white? Well yes in two cases (the volume and the scroll bar) but then does white represent something to click on? No...because the volume slider is white also. It's hard to come to a consistent understanding over what a button (or something you interact with) is and isn't.

7. The background looks lovely...but where are my apps?!

I've had this happen a few times...usually just after I've told the iPhone to update my apps. I quit out of the App Store app by pressing the home button and then for 5 seconds or so, I'm faced with a blank phone. I can clearly see I'm at the home screen, but where are my apps? Answer - they just appear with no explanation as to where they have been hiding.

I have never, ever, EVER used Spotlight on my iPhone. I'm OK with that...only now, my iPhone thinks I want to use spotlight constantly throughout the day. Let me explain...

Previously I was able to casually flick between screens with my thumb or any finger. But with iOS 7 I've discovered something about my swiping...I have a bit of a lazy swipe. In golfing terms (disclaimer - I don't play golf) I think you'd say I hook to the left and slice to the right. So before iOS 7 when I used to causally swipe left or right with my thumb I didn't know that it was more a lazy flick left and down...or right and down. And of course swiping down (even the slightest downward movement it seems)...you guessed it...activates Spotlight.

I have lost count of how many times Spotlight has been activated...and not just with my thumb, but with my fingers also. PLEASE Apple, give me some way to turn Spotlight activation off! I didn't think my swiping was that bad? 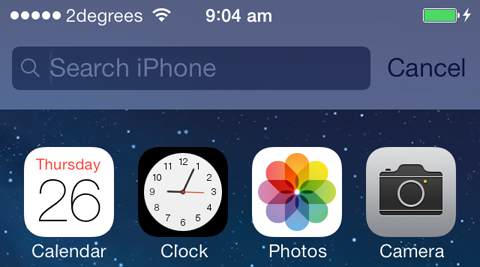 9. Screenshots on the iPad

The image below is the full sized screen shot from an iPad with retina display. Previously when I emailed these beauties to myself they were big and easy to see...at least twice the size of the images that I can email now. So what happened? Why is Mail shrinking my images without asking? And is there any way to turn that off? 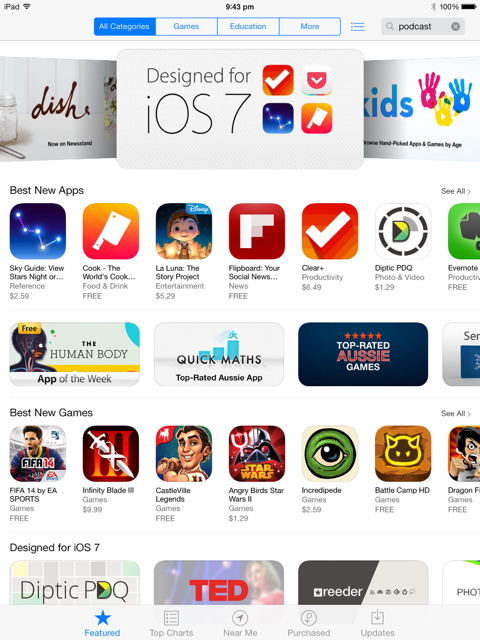 10. I don't want to know about previous manual updates!

Yes, I'm one of those strange people that still like manually updating their apps rather than (now with iOS 7) just letting the phone do it. I like to check what updates are available, have a bit of a read and then update them. But that's it...I don't need to be reminded by being presented with a list of the apps I have updated. I just want (like before) that the next time I go to the update screen, it is either blank (no new updates) or only showing new updates to install.

I get the idea of a list...it's for those that have set their phone to automatically update. They can come to this screen and have a look at what has happened without their involvement. But I have been involved...I know what I updated! I don't need to be reminded every time I go to this screen! 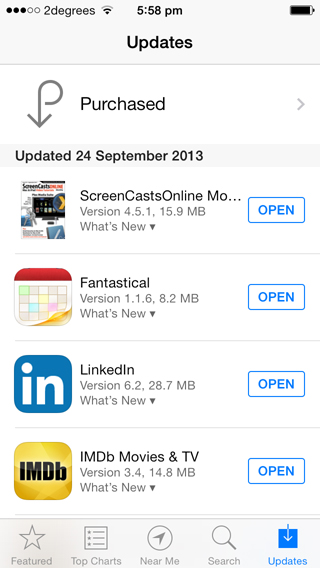 11. Searching that I cleared not being cleared

This happens a lot. In the image below, I have been searching for "podcast" in the App Store. When I found what I wanted, I went back to the search box and cleared it. In iOS 6 this would leave the search field empty from then on, but in iOS 7 I am finding it often repopulates the search field with the last thing you searched for. 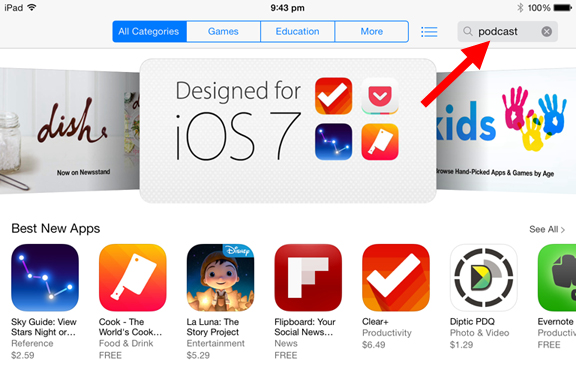 Have a look at the image below. You might think I have one update to install...when in fact I have two. Twitterific, at the time of taking the image, had not been updated. It had appeared in my update list, but only gave me an option to open. Since I manually update my apps, there is no way that the app could have updated itself. It took a few attempts of closing the App Store app and going back to this section before the "Open" button changed to what it should have been..."Update". 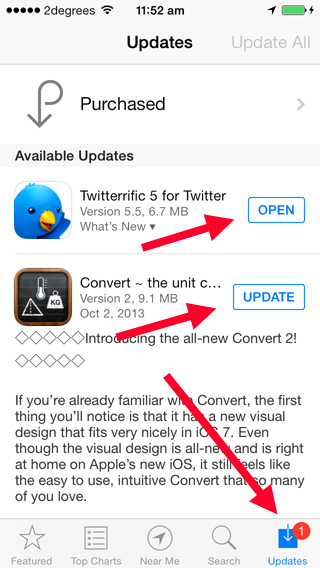 It doesn't happen that often, but I do sometimes get emails being listed twice in my In box. Here is an example of a link I emailed myself, showing up twice... 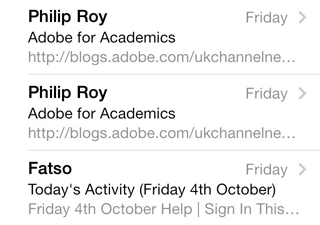 Probably the most frustrating...and one that I've still not figured out the quickest solution for. You are browsing with Safari, you decide to share a link via email, Safari pops up a window to let you address the email...but the email can't be addressed. In fact nothing can be done...Safari has frozen. You can't cancel, you can't tap into any field, you can't close the screen...but you can quit out of Safari. But if you open Safari again, you're back to the same problem.

So far the best solution seems to be going into my emails, finding a URL and clicking it. This forces Safari to load a second tab and from there you seem to be able to dismiss the page that was playing up. 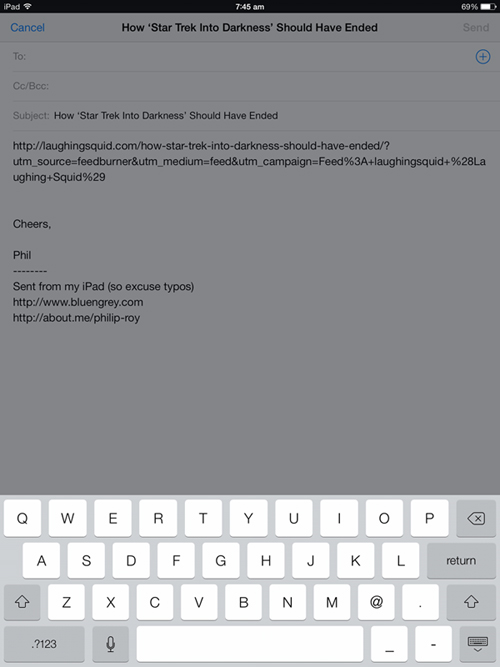 Similar to the problem above, I find that I can go into the App Store, look at the details of an app, and then am unable to close the window I am viewing. The App Store has frozen. So far the only solution seems to be to restart the iPhone. 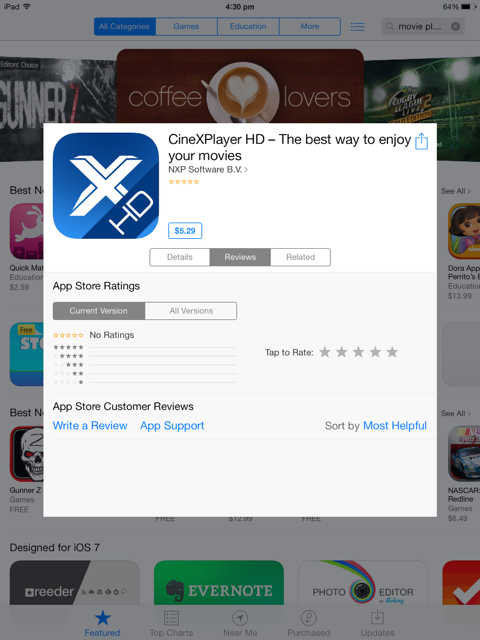 17. Gone, but not forgotten

With multitasking, apps now run in the background. You can kill them off (or close them properly) by double-clicking the Home button and then (when all your apps running in the background appear) swiping up to close them. Now the apps do close...but the problem is that they don't go away completely sometimes. Here you can see (on the left) 3 apps that I closed down in a three-finger swipe...and then on the right, the notes app that I closed, but a space remaining where it had been. Very odd! 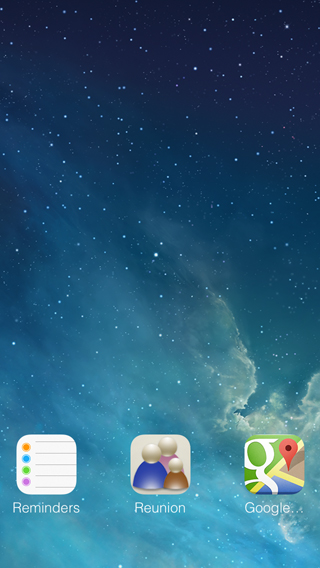 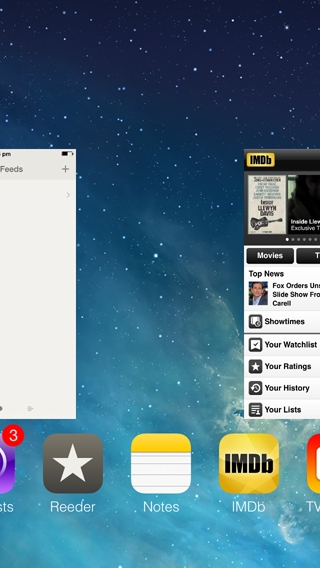