16 months ago I wrote an article concerning my experience using Camtasia for the first time. If you read anything from that article, read the summary...in which I both praise Camtasia and apologise for writing so much about its inconsistent interface.

You may be surprised to learn that I now own my own licence of Camtasia (and Snagit) as a replacement to previous screen recording tools on my Mac. Having used Camtasia again in a recent role, I was curious to see if things had improved. Unfortunately, it's a revisit that has mixed results.

So why did I ultimately decide to purchase Camtasia?

I am frequently working throughout the week on both a PC and a Mac. I can be on one or the other (or both) throughout the day. As a self-employed Instructional Designer, when I get hired by an organisation I'm usually provided with one of the organisation's secure laptops to use. These are always Windows laptops. The majority of organisations that I work for will not allow you to bring your own device in to the organisation. It also helps explain why I have never owned a Mac laptop, as I don't have the need for a portable Mac device.

I've worked in organisations where (when working from home) I could download and open anything from SharePoint using local apps on my Mac (like Teams and Word) but it is more common for an organisation to lock functionality down on your home device (no zero trust options are available) meaning you can access things on your Mac via a web browser, but can't use Mac applications. And this is where I started coming unstuck with screen capturing videos.

I cannot afford a subscription for either Adobe Captivate or Articulate 360 unless an organisation issues me with a licence. For years now I have used and loved Telestream's ScreenFlow. But it's Mac only and it was starting to mean that I was using it less and less, as I couldn't pass on project files to organisations that I worked for. So at the time that I started my last contract, I decided to not only purchase Camtasia for myself, but also Snagit. I knew that it meant that the project files could be handed over and that regardless of whether they were developed on the Mac or the PC, they could be opened and used.

Parity feels like it's not important at TechSmith...even within the same application

Parity - the quality or state of being equal or equivalent

So this is where the frustration started for me well over a year ago. For a company producing a product for both Mac and PC, it's not plain sailing when using Camtasia...especially when I can be on a Mac one day, in the office on my PC laptop the next and then back to the Mac after that. Heck, some days I have to work on both my iMac's lovely 5K screen, but then do a Windows only recording later on the laptop for the same project file. It's not uncommon for me to be swapping Camtasia files between my Mac and PC throughout the day.

Now there's a simple solution...stop using the Mac version of Camtasia. I should buy a monitor and plug the work laptop into it at home and only use the Windows version of Camtasia. But the whole point of me buying Camtasia was (as mentioned) because it's cross platform!

I thought it would be an opportune moment to revisit my frustrations from my last article and see if any have been resolved. It really is a mixed bag...and the fact that some basic interface issues still exist, is staggering.

The versions of Camtasia compared (for the record)...

Export craziness not only continues...it's worse than I thought!

Look at the following table. Go across the top row and compare each of the export option on a Mac. Then do the same for the PC options. And then, imagine you're jumping between Mac and PC and compare the columns to understand the differences between platforms...

This inconsistency continues to stagger me! Maybe it's OK that the options on the right of Camtasia aren't the same as the ones on the left. But look at the first two images for the Mac...if you want to do something such as export the project for Windows, you have to remember to use the "Export" menu that is part of the "File" menu and not the "Export" menu at the top of the application. The two menus on that side of the screen aren't the same and TechSmith expects you to always remember that.

And this is also where you have to start remembering which is the better approach based on whether you are using a Mac or a PC. It's better on a Mac to use the "Export" option in the "File" menu (as it has more options available)...but don't do that on a PC as there are hardly any options available. Imagine the cognitive load this places on someone like me, jumping between versions of Camtasia throughout the day...."Don't go to that menu on this version...That option isn't in the same place on this version...You won't find it there like you would on the Mac". Crazy!

I was ecstatic when this was released by TechSmith in August...so much so that I tweeted about it at the time. One of the issues that I was noticing on screen recordings focussed on the cursor, was that the cursor frequently changes its look as it interacts with a website or web-based application. Just watch the following example of the cursor on my Mac as it moves across different objects on a news website (there is no audio in this clip)...

Camtasia now lets you see all the different cursor types that appear in a recording and allows you to replace them by setting a standard cursor across the entire recording (or you can refine your cursor choices on a one-by-one basis throughout the recording). 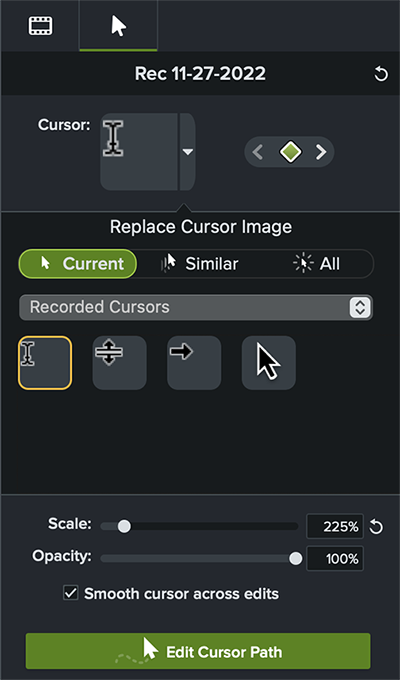 Let's look at the same video clip with one cursor style selected for the entire recording. Pay close attention to the cursor and see now how it stays the same visually. This is such an easy change to make in a Camtasia recording and has made me exceptionally happy, as the cursor changing is now no longer a distraction!

Parity versus being consistently inconsistent

Before I conclude this article, I do want to point out that Camtasia has also introduced a reverse video feature, although I've not had an opportunity to try using it.

To finish, I want to give a very simple example of why I don't understand the process that TechSmith uses to develop the Mac and Windows versions of Camtasia. It seems at times that maybe the two development teams aren't actually talking to each other to keep the application types on a par with each other.

In late August, Camtasia posted this helpful tip (about extending frames) on Twitter. The video is great, short and informative. I don't have any issue with how helpful it is...but at around 45 seconds, Andy makes a comment that frustrated me so much I felt the need to respond on Twitter. Here's his comment...

"Quick Pro Tip - If you're working with Camtasia on Windows, you have a second option for extending frames. Just move your play-head to the exact frame you'd like to extend, then right-click on the clip and select the option titled Extend Frame"

What?! Why on earth is this Windows only? I just don't get it. There's no reason that someone responsible for ensuring parity between the Mac and Windows versions of Camtasia couldn't have told the teams that they needed to implement this functionality on both platforms! This is not good software development and seems to assume that users are either using the Windows version or the Mac version of Camtasia, but not both. And I find that bizarre...especially when the licence for Camtasia not only allows you to install Camtasia on two machines, they actively promote the fact that this can be on a Mac and PC!

Come on TechSmith! Please stop treating the same app in different ways across platforms. Embrace the fact that you not only have a dual-platform application, you have dual-platform customers!

Make changes (some of which are so easy to implement) to allow those of us using both Windows and Mac versions of Camtasia, to not have to spend our days thinking about the differences we are going to experience...day in and day out, depending on which platform we are using with the same product!