In 2014 I was hired as an eLearning Specialist by Te Rito Maioha Early Childhood New Zealand (formerly Te Tari Puna Ora o Aotearoa New Zealand Childcare Association) to review their approach and delivery of blended learning. This included reviewing their existing e-learning platform and resources; how the various programmes were delivered at their 11 locations around the country and online. From this I developed a report detailing my findings and recommendations for approximately 18 months of development and beyond. The recommendations were accepted by the Senior Executive Group and I was tasked to implement the recommendations.

One of those recommendations included a substantial upgrade to Moodle, the Learning Management System in use by the organisation. Moodle had not been updated for some time, required restructuring and moving to a new Moodle host. We hired Catalyst IT (a Moodle Partner) to host Moodle for us and launched a new site at the beginning of 2015 using Moodle 2.8 (the most up-to-date version of Moodle at the time). As well as a new theme (developed for us by Catalyst) I had spent time gaining feedback from staff and students about Pou Manawa Akoranga (the name ECNZ uses for its online learning environment) and made the decision to restructure both the layout and navigation of PMA. Using my experience with usability and interface design, I simplified the navigation of the site, made the courses that students were studying the focus of the site, implemented a responsive website that also integrated with the Moodle mobile app. I also needed to ensure that the site integrated well with the Student Management System and Mahara ePortfolio system.

With the new version of Moodle, I also worked towards introducing new technologies to all staff across the country, such as Microsoft Office Mix presentation tool. To support the site, I developed a Publishing Style Guide to ensure consistency across the organisation in terms of the style in which ECNZ's courses, papers and programmes were delivered in an online environment.

You can see some images below of Pou Manawa Akoranga showing the layout of the Moodle environment, the simplified structure of the menu navigation (which involved one customised "Course" menu being developed for us), some of the eLearning support material that was developed for staff and students, as well as gaining an understanding of the clean layout that we put in place (using the Collapsed Topics plugin for Moodle, which we supported through sponsoring some enhancements to the plugin) to keep the site simple to use and navigate. 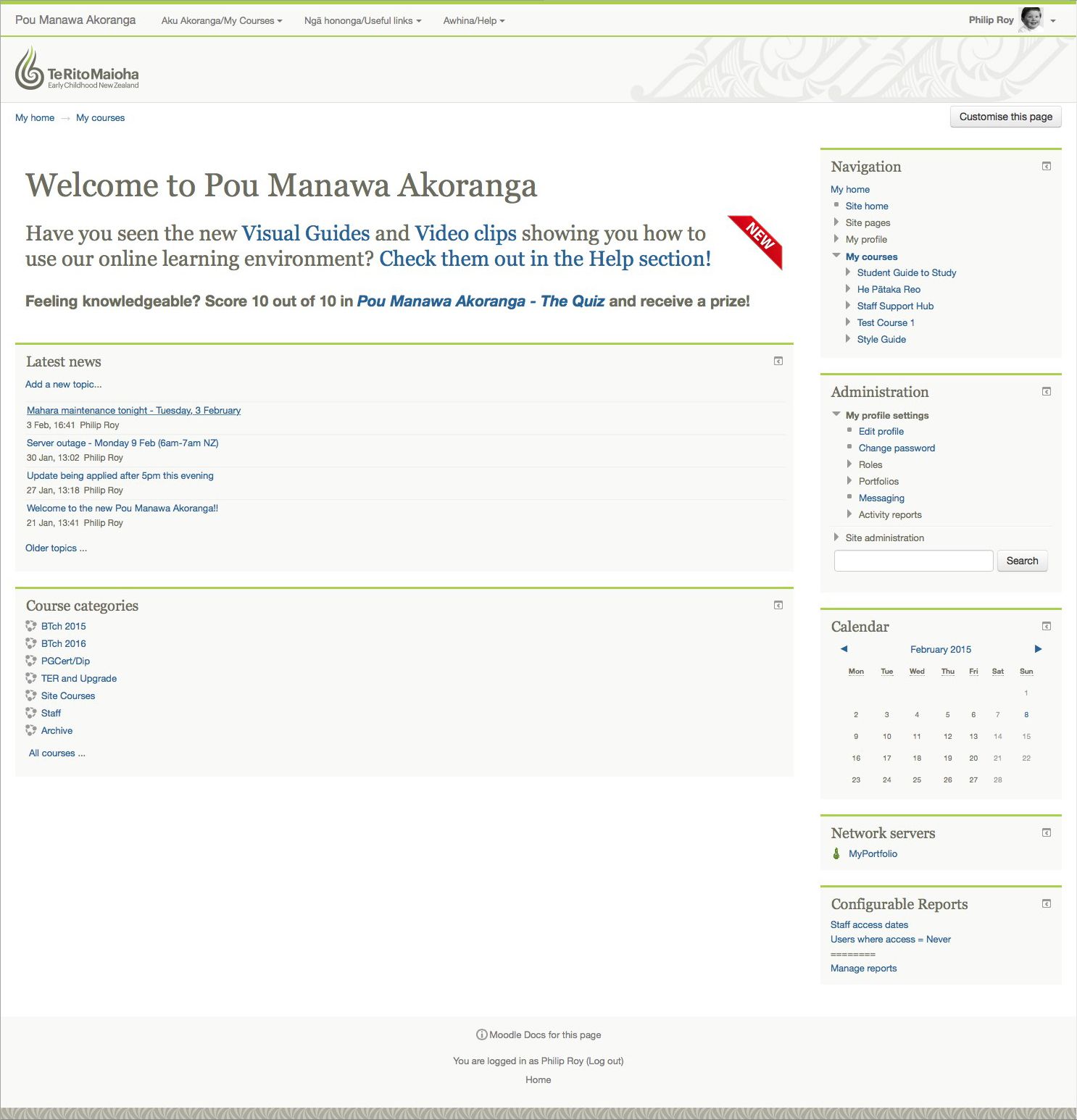 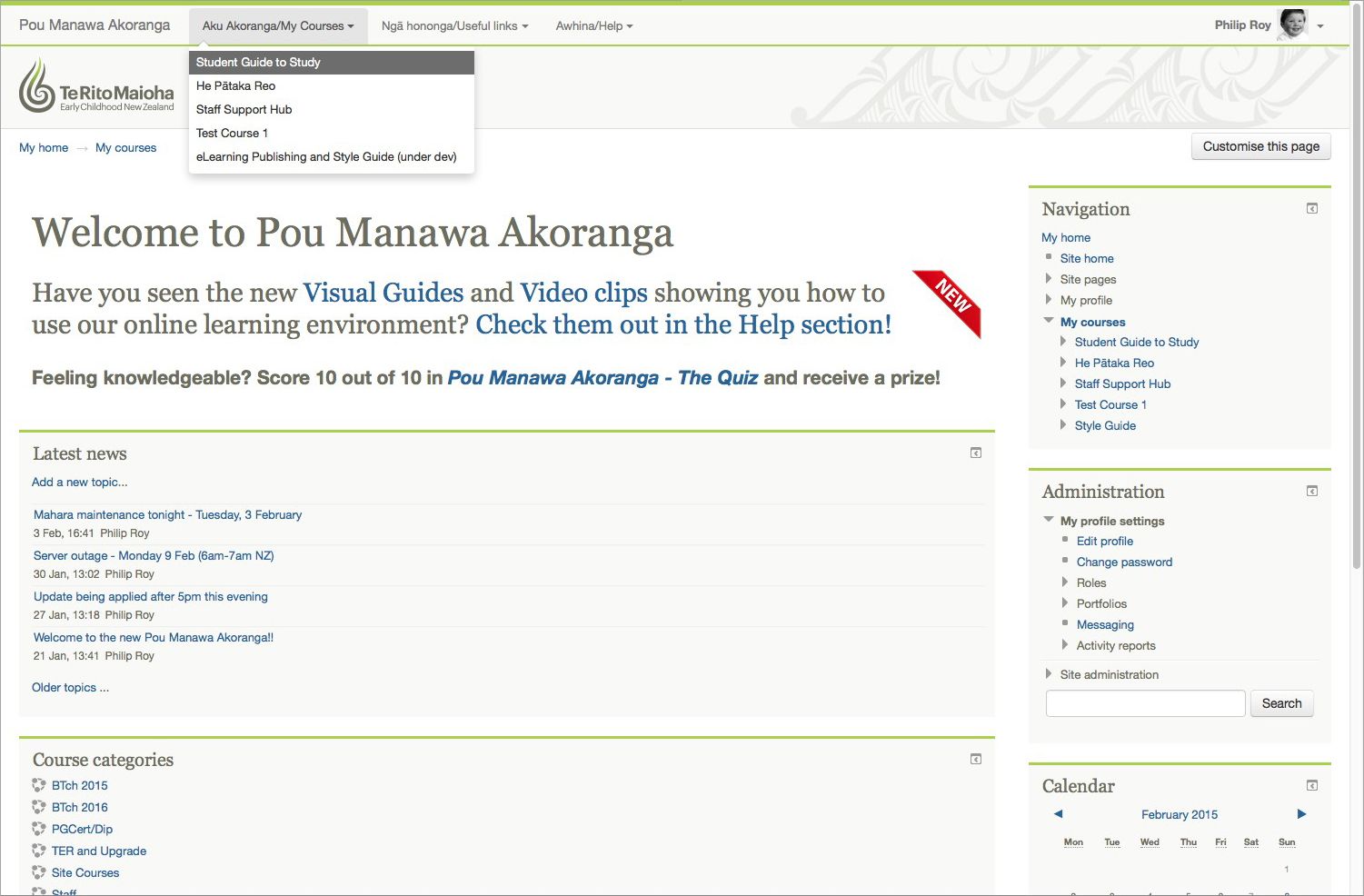 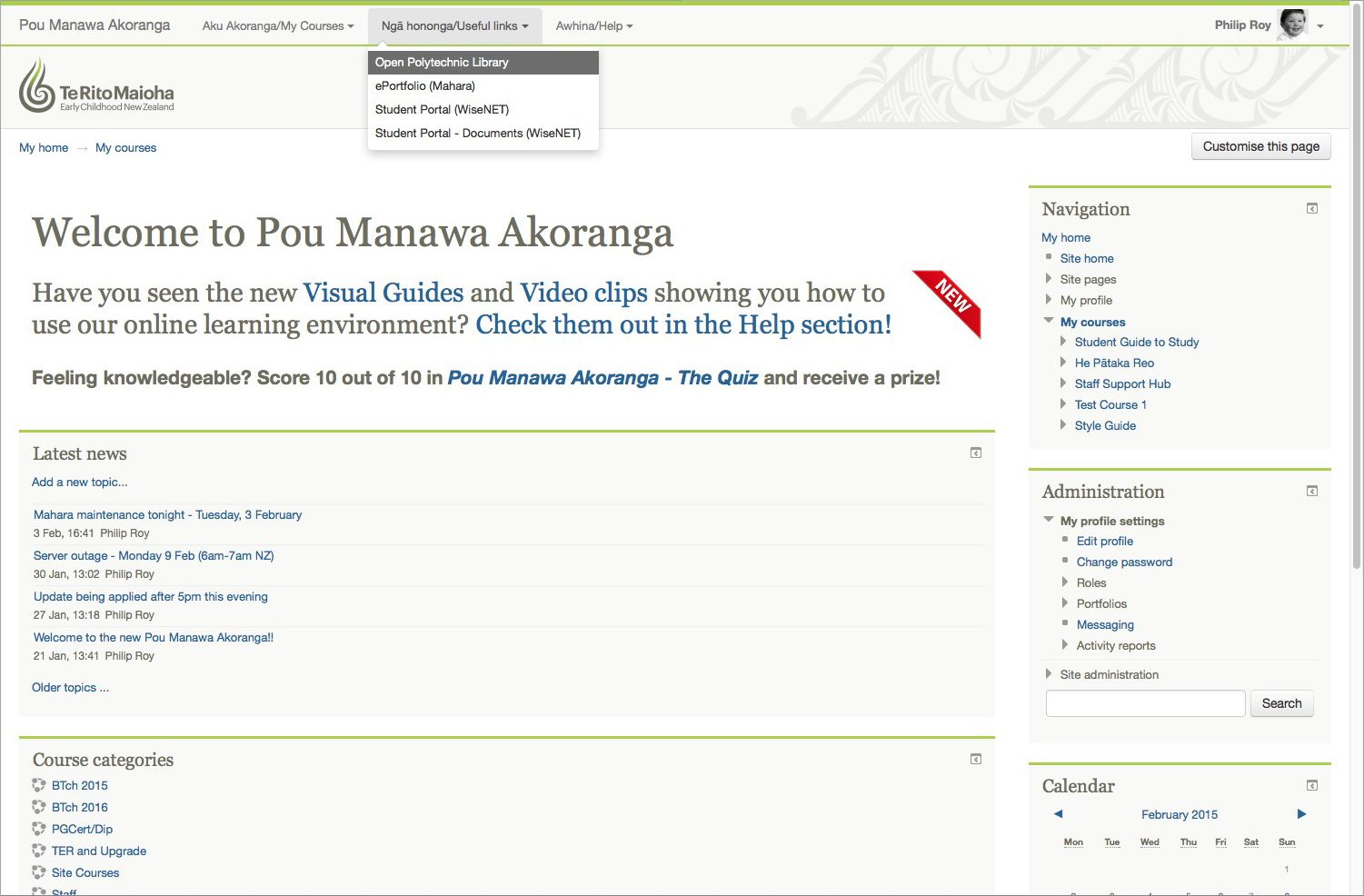 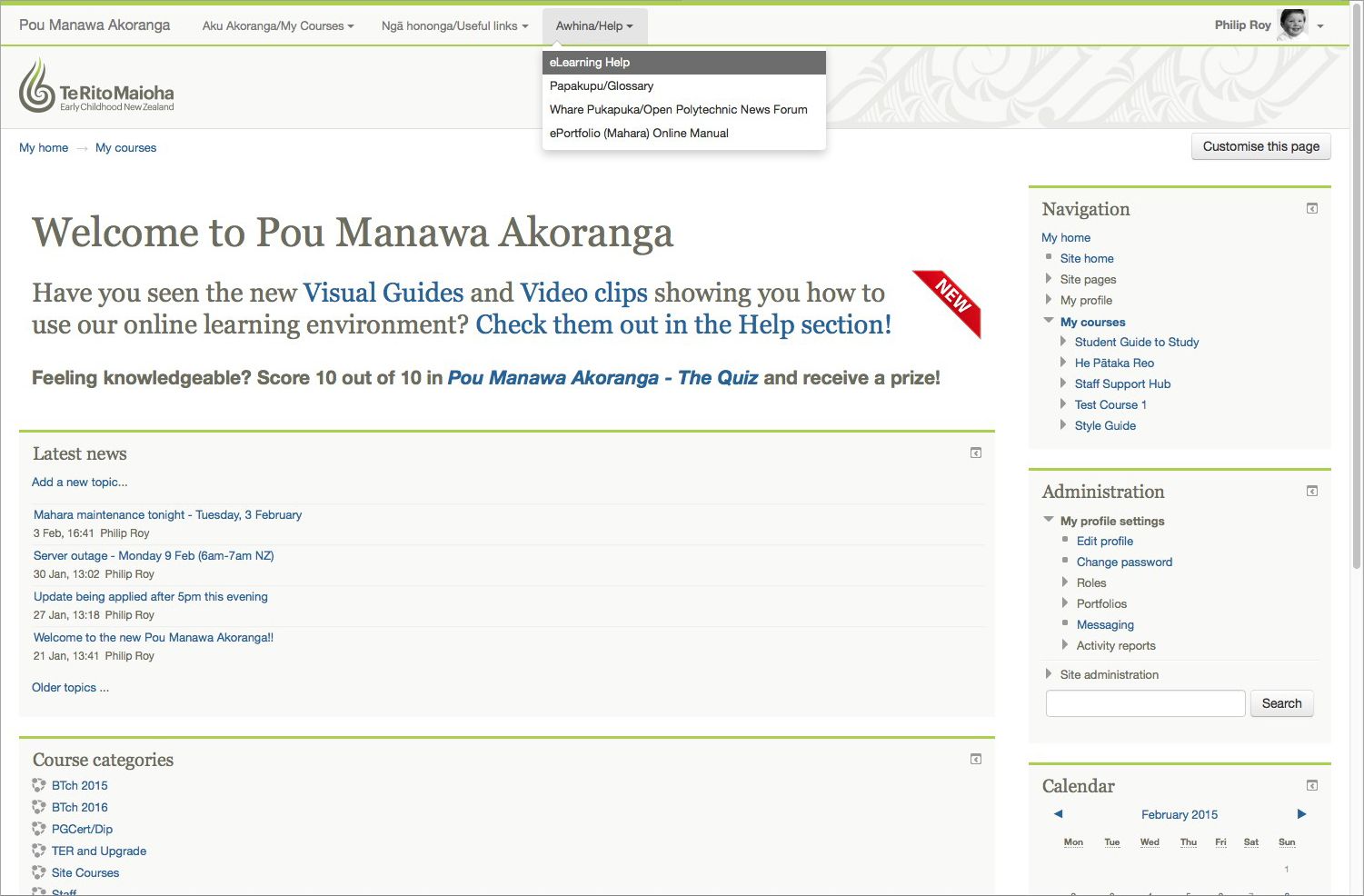 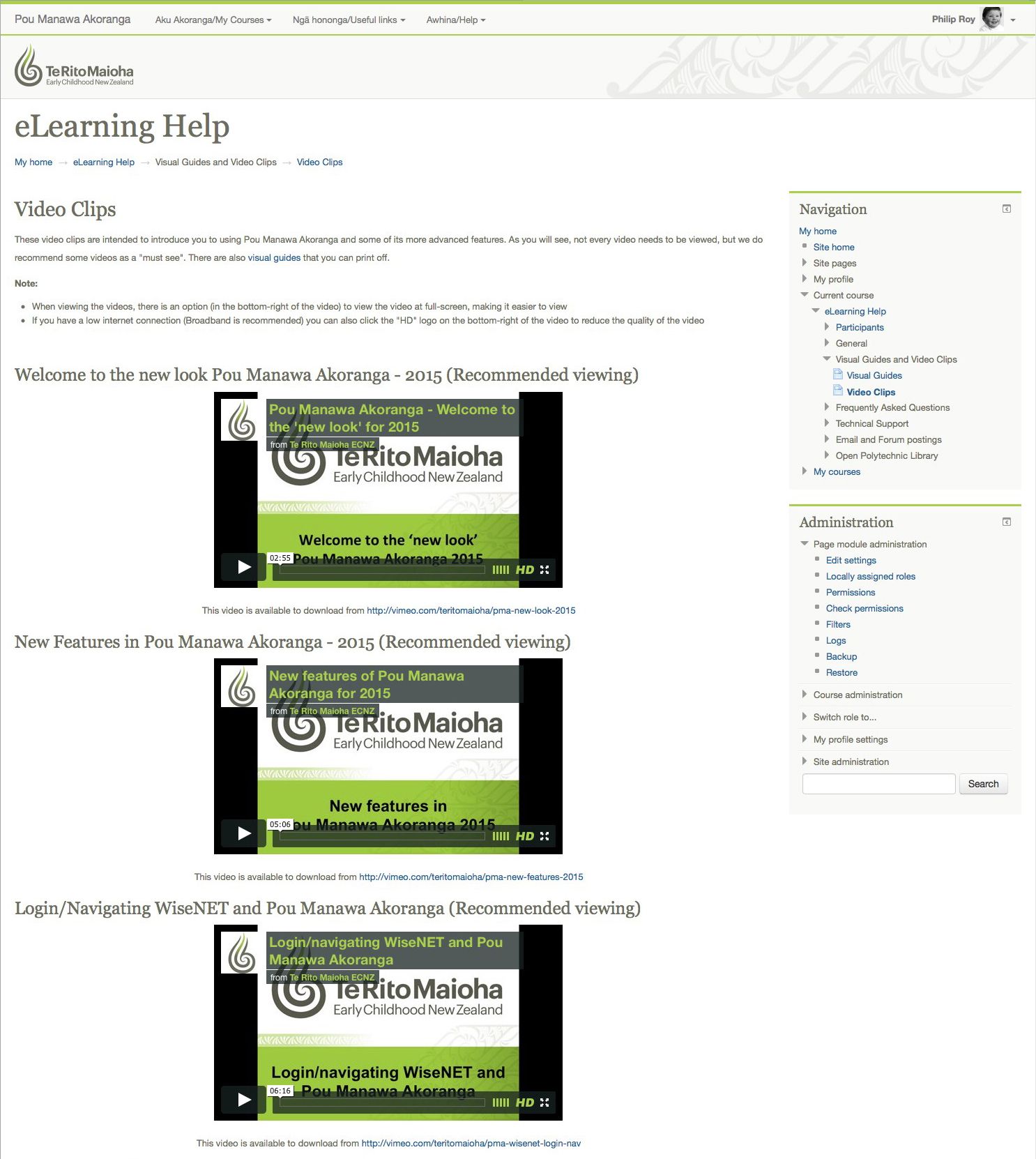 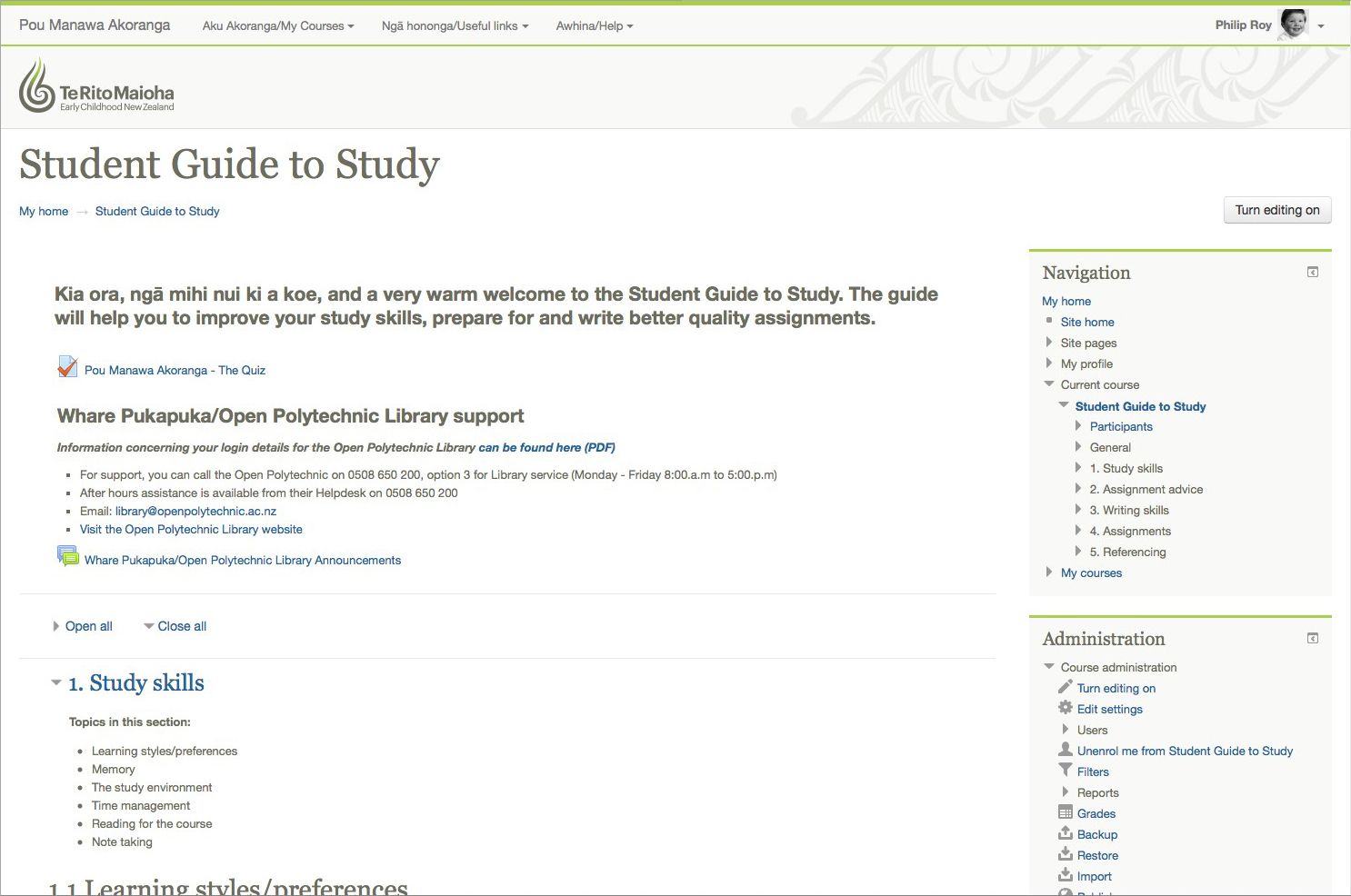 I also produced a video for staff and students that announced the new version the online learning environment to them.

Media used with permission from ECNZ