In 2005 I wrote an article for the Journal Of Distance Learning entitled Learning Management Systems and the Realities of Using Open Source Software*. I wasn't very happy with the fact that the article was published with edits that hadn't been discussed with me, such as paragraphs being moved and words changed (such as "software's lifecycle" being changed to "software's lifestyle"...yikes!). 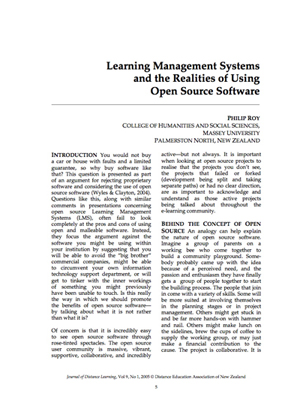 I found the responses to the article interesting. It was suggested by some that it was 'anti-Moodle' and 'anti-open source', which I found ironic, given that (a) I was attempting to get Massey University to start looking at Moodle at the time (it would be a number of years before those who strongly resisted Moodle changed their minds), and (b) I was (and remain) a heavy user of open source systems.

What it was in fact a response to was the numerous presentations I had attended where many people painted open source software as free and malleable, without really talking about the other issues you had to consider. Open source software is fantastic, but you need to be realistic when considering using it and bringing it into your organisation.

There was a response published to the article in the next issue of the journal (which I discovered purely by chance) but again, I wasn't informed that this was happening. After discovering that the Journal had once again not followed appropriate processes for a right of reply, I decided to move on.

It was great to see Moodle start to be adopted by Massey University in the years subsequent to this article. I've had the pleasure of using both Totara LMS and implementing significant upgrades to Moodle in my work in the years that followed.