Articulate - There's a lot to be said about simplicity - Pt 2

During my time using Storyline, Articulate implemented a superb new feature to the software – the Media Library. I'd suggest you watch the introductory video here. I was incredibly impressed with what they had done when the library first came out. The ability to see all your assets in one location, to easily swap or amend images (without having to visit slides) was superb…and the team asset library features make it even more powerful. But they weren't done!

And this is an example of the power of an agile, iterative approach to software development (that I'll touch on later) that shows how useful it can be for users. Articulate continued to refine and add superb new functionality to the Media Library over the next few months. One update in particular, caught my eye – "Enhanced: Use the media library to add alternate text to assets in your project and manage closed captions for videos and audio clips."

This means that you no longer have to visit each individual slide to check or add 'alt' text to an image. Even better, you can apply an 'alt' text for an image in the Media Library and have that 'alt' text applied across every instance in a project where that image is used (if you want). That is fantastic! I also suspect (in the future) that it will change the way I work on accessibility tags for a project. I suspect that from now on I will first go into the Media Library and add 'alt' text to the items I see there, and then secondly, visit each slide and use the "Tab Order" feature to then do a final check whilst removing or ordering the items that I want a user to tab through when using a screen reader.

Another nice touch in this area is the ability to add notes to the images, such as noting the original source of the image or publication limitations (for example, "For internal use only. Not to be used outside of the organisation.") or comments that would help when reviewing the project in the future. These notes don't get published but will prove remarkably handy for someone working on the file later on. 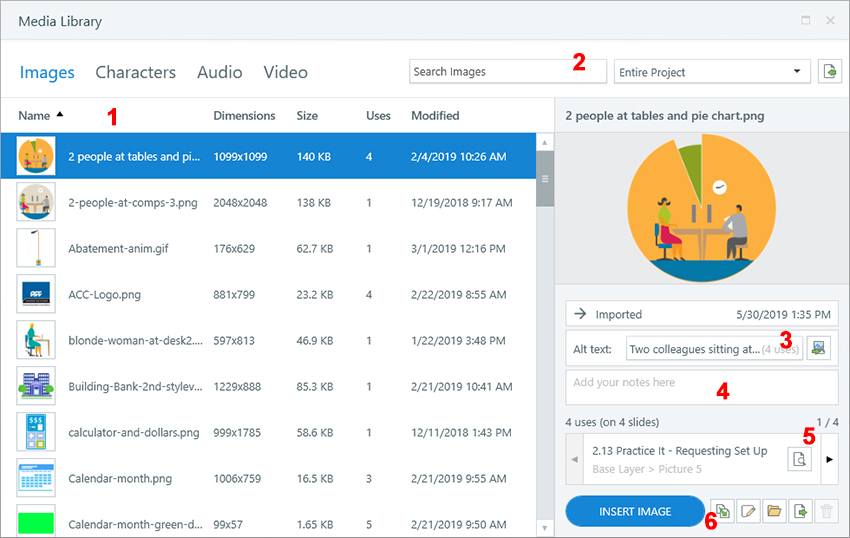 In the media library here's just some of the things you can do - (1) View all the images used in a project, their dimensions and how many times they are used. (2) Search for images to a fine grain level throughout the project. (3) Review or add alt text to one instance of an image or have that alt text applied to every instance. (4) Add notes related to the image as a reference for later on. This information is not published. (5) See and jump to slides in the project that make use of the selected image. (6) Insert an image, replace an image across the whole project, edit the image, open the folder where the image is located, export the image or delete it ...all without having to go to the slides where the image is used!

Many users have complemented Articulate on the Media Library and it's great to see people offering suggestions as to how the functionality of the feature could be extended. One suggestion I added my voice to is that it would be great if this library (or some other location) showed a list of all external hyperlinks used in a project (and that they could be exported to a CSV file) to help with ongoing checking and maintenance of links.

Other bits and pieces

There are some superb tutorials on the site created by Articulate, with source files included. I found this amazingly useful to get up to speed with Storyline very quickly.

Staff are actively assigned to the discussion forums and I've not come across a piece of software with such an active support network for some time. That said, I will be touching upon concerns I have regarding support later in this article. As a positive example, I posted an issue and received responses in less than 24 hours when I spotted a bug and had that bug confirmed. I was really impressed.

On another occasion, I came across a technical issue that I posted about in a discussion already occurring in the forums. I was advised to submit a ticket and was impressed that the ticket I submitted was responded to in less than 2 hours (2 hours folks!!) and that subsequent responses were relatively timely also. This is really impressive given the fact that I'm in New Zealand and the support staff are on the other side of the planet. I also loved the fact that the Customer Happiness Specialist (sorry, I find titles like that a bit naff) who had told me to put in a ticket, then posted a comment in the forum saying she was following along with the ticket I had submitted. That was a really, really nice touch and showed an effective support approach between various groups at Articulate. It was kind of like Articulate saying "Don't worry…we've got you", which was awesome!

The player that your content is 'wrapped' in when publishing comes in two forms – the classic (Flash-based) version and the modern HTML5 version. Obviously, you need to start using the Modern Player with the death of Flash happening soon. The player has some great features that help you restrict progress (showing or hiding the forward and/or backward buttons), locking or hiding the menu etc. Customising this player is relatively easy, but it has some limitations. Many have asked for the ability to customise every colour within the player, but this is currently not possible.

The software has a lot of nice templates available to use and it's great that there are often a suite of templates that all use one theme style. It means you can pick a look and feel and have various presentation and quiz templates on hand to use throughout your project. Articulate also have a superb team collaboration feature allowing everyone in a team access to shared templates as explained in this video. Access to images and artwork from within the application means you have a massive and easy-to-use content library available. Articulate appear to make use of Unsplash's API, giving you an ever-expanding list of images. Ironically when I first started using Articulate, I got a bit confused by this…

This is odd. New to @Articulate I was searching the app and @unsplash and the first 6 images are identical? One is a site for free images and the other is a commercial product? pic.twitter.com/qNQGef70xL

I didn't have any need for screen recording in the project I was involved in. In my brief testing I found screen capture very easy to use and quite intuitive. Coming back to my oft-used word, I found the capture process quite simple compared to Adobe Captivate, which I think can be overly complicated…especially the difference with how each application differentiates screen grabs versus a complete video capture. Articulate makes adding overlays and interactivity to recordings simple, and I particularly liked the clean interface when using the feature called "Action fine tuning" to adjust the screen recording more.

A feature I became slightly fixated with was font replacement…the ability to find and replace a font used within a Storyline project. It's a great way of removing stray fonts from your project…but be careful, you'll need to review the text on the slides as some odd things happened to me. We had decided to use one font (Open Sans) across all projects, and when I spotted Webdings showing up in the 'find and replace' font list, I replaced all instances of it…only to realise 24 hours later that any tick I had used in a list, was in fact a Webdings tick, and I needed to work my way through the project to fix these instances up.

Font replacement lets you find and replace fonts that you have used in a project.

This was complicated further by the fact that there is no simple "find" option for fonts…just find and replace. I'm not the only person in the forums to ask for the ability to simply "find" the next instance of a font in use, be implemented. At the moment you have no idea where the fonts are in use unless you manually search every single slide. Keep in mind also, that if you cut and paste slides from other project files, or download and use a template, you shouldn't be surprised when your project suddenly seems to have more fonts in it than before.

In a "blink and you'll miss it" moment, I discovered that there are in fact options you can select during the publication process that I hadn't seen mentioned anywhere. I'm sure that Articulate do in fact mention these, but I had never noticed them. They give you the option of (for example) just publishing one slide or scene to Articulate Review, or adjusting the quality of the video and audio bitrates to affect the size of the final project. 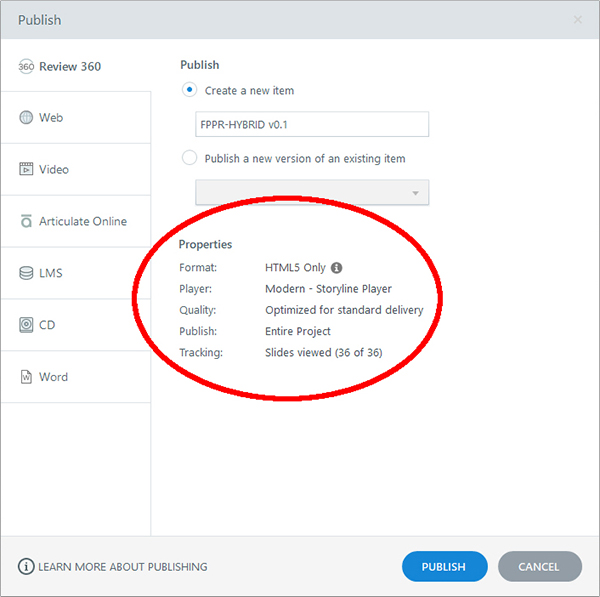 It was months of using Storyline before I realised that these properties here are actually clickable, and can then be adjusted, as you see in the two images below. 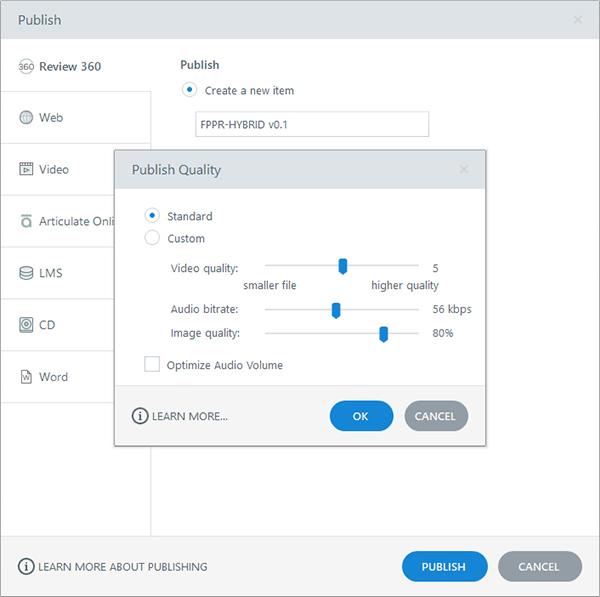 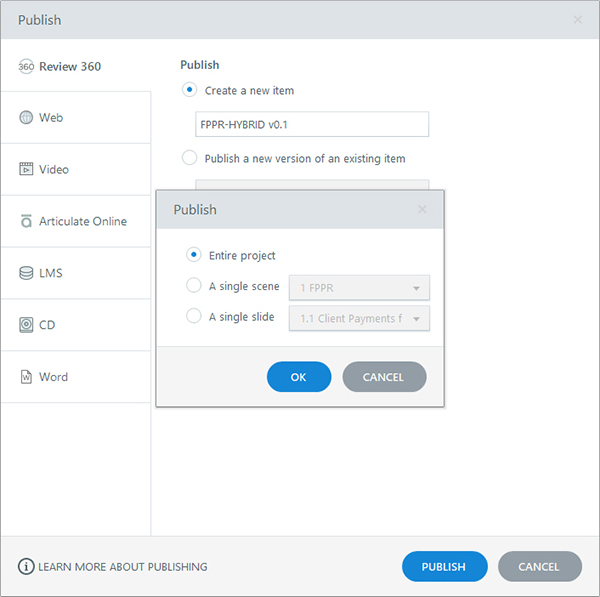 A nice feature we didn't use (but could be handy) is the ability to add notes in a slide for future reference. It would be great for keeping track of development or handover notes for someone. My concern though is that there is no visual indication of when a slide has notes associated with it…so you could easily miss the fact that you are working on a project file where someone has added notes. To me, this makes it a nice feature that I would never consider using.

Slide notes - A great feature that is poorly implemented. Just look at the image above and try and figure out if this slide has any notes associated with it.

The answer is yes - But you would never have known without checking. There is no visual indicator that notes are present.

Because of concern that these notes wouldn't be noticed by anyone else, I tended to add hideous text boxes with yellow highlight on to a slide (for my colleague to see) when trying to comment about something. In short, I had no faith on the effectiveness of the Notes tool as it is at the moment.