I recently had the opportunity to deliver training to Embassy and High Commission staff (from around the world) of the New Zealand Ministry of Foreign Affairs and Trade.

Whilst many staff came to Wellington for training, I also got to travel to Washington DC and London to deliver some final sessions at the New Zealand Embassy (in DC) and the High Commission (in London).

Because I had visited a number of the Apple Stores mentioned in this article before (and because the stores are no longer the unique experience for me they were so long ago) I didn't take as many photos as usual…but here are the photos that I took.

One of the things that really hit home to me with the smaller stores (like those in DC) is that I find it hard to understand why there isn't at least one Apple Store in New Zealand after all this time? It's been over 15 years since the first Apple Store and yet there are still no signs of one ever arriving here. Whilst I have no doubt that the the amount of foot traffic to the area the store is located in is crucial, I am sure that there are locations in New Zealand where Apple could easily access that number of shoppers.


This is one of the Apple Stores that has been changed to the more open layout (i.e., no dedicated Genius Bar area) and whilst the experience is open and inviting, it's also slightly busy and confusing. We sat and watched a demonstration occurring at the end of the store and I felt sorry for the chap delivering the demo, as people appeared to walk through the middle of the demo to get to other parts of the store without realising what they were doing.

What did impress me (and I noticed this in every store) was just how many Apple staff were on hand. It was an incredible ratio (maybe 1 staff member to every 8-10 customers?) and it really meant everyone was quickly served or supported.


Quite a small store and one that blends into the street easily. I was amused by the umbrella wrapper at the front door, letting you wrap your umbrella in plastic to try and stop the store floor (which was made of lovely tiles) becoming wet and slippery when it rains.


I love this store (having visited it in 2010) and was gutted to read (before I left New Zealand) that it was closing for renovations whilst I was in London.

As it was, we arrived in London to find our hotels rooms weren't ready, so we walked to Covent Garden and I was surprised to find the shop still open…in fact for the last day, before it was to be closed. One thing I did note (and I had commented on the poor location for it) was that it appeared that the training area had in fact been moved from the centre of the store.

When I tweeted on July 3 that the store was now closed, it was one of my most liked Twitter posts... 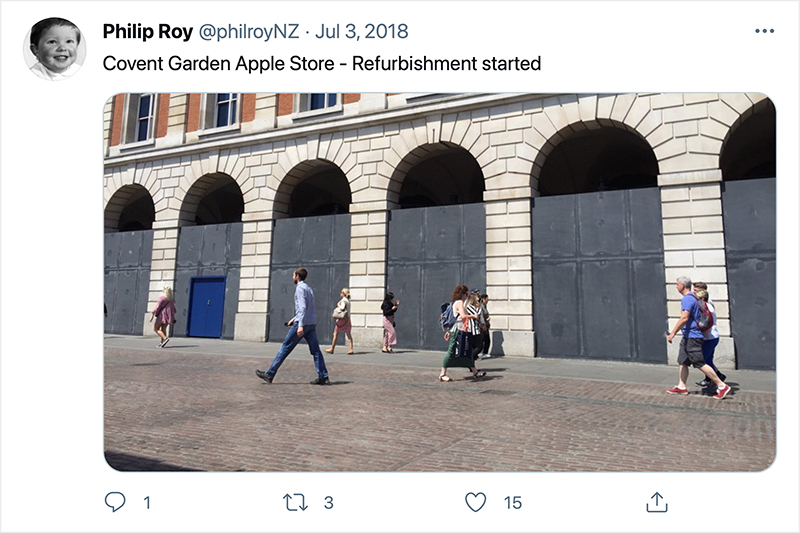 
This visit really changed my opinion of this store. Last time I visited, I found the Regent Street store busy and awkward. It just seemed too popular, crowded and busy (compared to Covent Garden at the time that was airy and not packed with people). Of course the location of this store makes it understandably busy.

This time, although it was packed with people, I found the shop brighter, more open and inviting. Again, there were so many staff around that I was thoroughly impressed.

I love that mini lessons occur at the tables now and that the person delivering the lesson uses a headset to amplify their voice to those at the table or those standing nearby…or else you'd have trouble hearing them.

I found it all very casual and laid back. If you want to stand or sit in on a session, you can. You're not acknowledged if you are just standing nearby listening in…it's just nicely accepted that you might want to join in or be a casual observer (so you don't feel like you have interrupted). And it was great to revisit the next day and see a person with impaired hearing being supported by a sign language person in a session on video editing. It may be that the signer came with the person attending, but it was just great to see how easily the lesson was going in the midst of a busy store.


I had just about done my dash of London and shopping, but went to the White City Mall to grab some final things (not from Apple) before heading back to New Zealand, and popped into the Apple Store. Again, a fairly open store, but somewhat hampered by the thick columns in the middle of the store that don't make it feel as open as other locations…although I am not sure Apple can do much about that. The columns and what felt like a low ceiling, made the store feel a bit claustrophobic I thought.