Long Answer : Well, the art of coming up with the name for your web site isn't an easy one. After thinking about it for a while, I settled on 'blue n grey'....a bit of a running joke amongst friends about the colour of the clothes I tend to wear or buy. Why not? 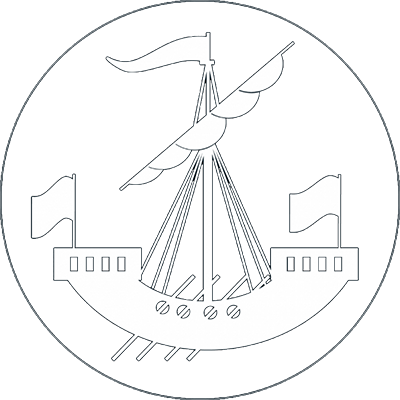 What's with the ship?

The ship is just one very minor component of our family Coat of Arms, but is the focal point of signet rings that have been worn in our family for a number of generations. Associated with it is a Latin phrase "Qua Tendis", which we've always translated to "Wherever you go", but a more accurate translation is "Whither do you steer".

What's with the Thunderbird 2 image?

I'm not an obsessive fan, I just love the programme. The image is from a Thunderbird 2 alarm clock given to me as a leaving present by the staff when I left a teaching position at Southmead Primary School, Wimbledon, London in 1992. I'm told one of the dinner ladies had sent her husband to queue for 4 hours outside Hamleys in Regent Street to get it. I wish I had kept the box! The alarm still works, but it is far too loud to use each day. The kids I taught had performed a play I created called "The Thunderbirds save Santa" as their Christmas performance that year.

See, I'm not obsessed at all...but I was the first person in the world to back the Thunderbirds 1965 Kickstarter project in 2015 and here's proof!

What did you use to build Bluengrey.com?

The site runs on the Joomla open source Content Management System (CMS) which you can learn about at http://www.joomla.org and uses a theme I have modified that is part of YOOtheme Pro

I also used a few extensions that have been added into the site to increase functionality. They are as follows...